Please fill with Your Details

Google has recently rolled out a new broad core update, named the November 2021 Core Update. It also notified people in advance that it will be releasing a broad core algorithm update soon. The search engine took to Twitter to announce this rollout. Till now, it reported about its update on its Search Liaison Account. But the broad core update was announced via the Google Search Twitter Account.

Later today, we are releasing a broad core update, as we do several times per year. It is called the November 2021 Core Update. Our guidance about such updates is here:https://t.co/0LAL28ueDq

The rollout, according to Google, started at 11 AM ET. It announced, “The November 2021 Core Update is now rolling out live. As is typical with these updates, it will typically take about one to two weeks to fully roll out.“

It certainly is a bit surprising to witness the search engine rolling out this update earlier than before and most possibly during the largest online holiday shopping season. It’s somewhat shocking because earlier, Google took breaks prior to this season, which was, in the words of Matt Cutts, a former Googler, the search engine’s “gift to webmasters.’ 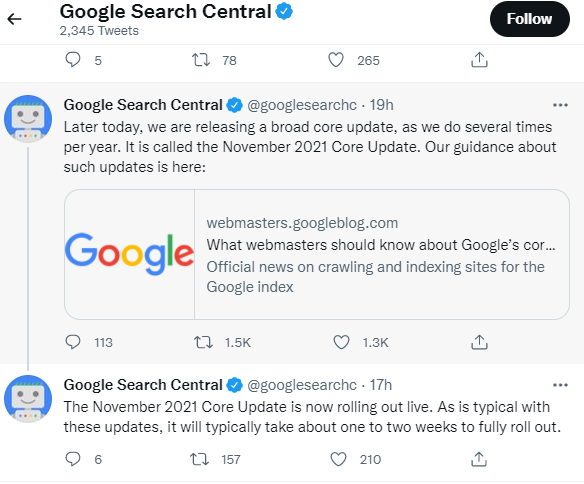 Indeed, Cyber Monday and Black Friday are both less than fourteen days away, and the search engine is releasing this update starting November 17.

Regarding the peculiar timing of the update, Danny Sullivan of Google asserts that its purpose isn’t to trigger concerns. He said that the search engine giant would certainly take into account the timing feedback of people into consideration.

However, according to him, the timing of the November 2021 Core Update isn’t much of an issue, as his tweet mentions, “Given we did an update last year in the middle of the shopping season & that largely seemed not a huge issue, getting one out of the way before the season didn’t seem a problem.”

What Site Owners Should Do ?

For website owners, though, Google points certain things about the update. The search engine warns them to expect noticeable effects, like drops or spikes in their rankings. However, the updates are broad in the sense that they do not point to anything in particular.

Their underlying motive is to enhance the overall systems of the search engine. Site owners should also be aware of the fact that web pages that notice a fall in rankings are not being penalized, rather they are being reassessed.

As always, emphasizing on delivering high-quality content is the best way to manage the effect of the core algorithm update. Website owners should never lose sight of this fact, as that’s what the search engine’s algorithms “seek to reward.” Original information, comprehensive descriptions, and insightful analysis should always be the priority when creating and posting content.

Broad core updates occur in a span of a few months. The November 2021 Core Update is the third update that the search engine released as of 2021. More details will be released soon when the update rolls officially.

It will certainly pay if you keep an eye on your website rankings and analytics over the subsequent few weeks. Website owners will undoubtedly come to know the positive or negative impact of the update on their web presence.